What is Natural Language Processing?

Natural Language Processing, or NLP, is a field derived from artificial intelligence, computer science, and computational linguistics that focuses on the interactions between human (natural) languages and computers. The main goal of NLP is to program computers to successfully process and analyze linguistic data, whether written or spoken.

Operations in the field of NLP can prove to be extremely challenging due to the intricacies of human languages, but when perfected, NLP can accomplish amazing tasks with better-than-human accuracy. These include translating text from one language to another, speech recognition, and text categorization.

Due to varying speech patterns, accents, and idioms of any given language; many clear challenges come into play with NLP such as speech recognition, natural language understanding, and natural language generation.

What Can NLP accomplish?

The following applications are driven from the use of NLP:

While extremely powerful, NLP models can also be difficult to build because of the dynamic and nuanced nature of human languages. Some of these challenges include:

Even with these challenges, there are many powerful computer algorithms that can be used to extract and structure from text.

How does NLP work?

NLP works through the inclusion of many different techniques, from machine learning methods to rules-based algorithmic approaches. A broad array of tasks are needed because the text and language data varies greatly, as do the practical applications that are being developed. Consider a chatbot or digital voice assistant as an example.

To make sense of a request, the computer needs to:

The very best NLP systems go further, and learn from interactions. A chatbot might learn how to converse on new topics as part of its interaction with people, for example.

At a technical level, NLP tasks break down language into short, machine-readable pieces to try and understand relationships between words and determine how each piece comes together to create meaning. A large, labeled database is used for analysis in the machine's thought process to find out what message the input sentence is trying to convey. The database serves as the computer's dictionary to identify specific context.

NLP makes use of several algorithmic techniques to parse text. These include: lexical analysis and synctactic analysis. 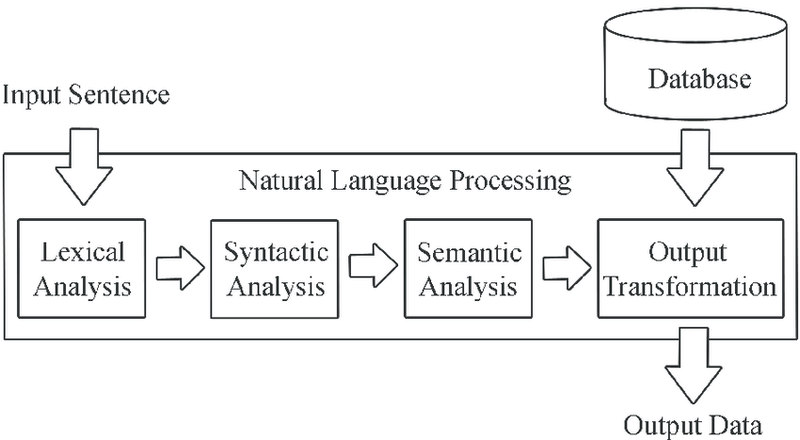 Lexical analysis is the process of trying to understand what words mean, intuit their context, and note the relationship of one word to others. It is often the entry point to many NLP data pipelines. Lexical analysis can come in many forms and varieties. It is used as the first step of a compiler, for example, and takes a source code file and breaks down the lines of code to a series of "tokens", removing any whitespace or comments. In other types of analysis, lexical analysis might preserve multiple words together as an "n-gram" (or a sequence of items).

After tokenization, the computer will proceed to look up words in a dictionary and attempt to extract their meanings. For a compiler, this would involve finding keywords and associating operations or variables with the toekns. In other contexts, such as a chat bot, the lookup may involve using a database to match intent. As noted above, there are often multiple meanings for a specific word, which means that the computer has to decide what meaning the word has in relation to the sentence in which it is used.

This second task if often accomplished by associating each word in the dictionary with the context of the target word. For example, the word "baseball field" may be tagged in the machine as LOCATION for syntactic analysis (see below).

The syntax of the input string refers to the arrangement of words in a sentence so they grammatically make sense. NLP uses syntactic analysis to asses whether or not the natural language aligns with grammatical or other logical rules.

To apply these grammar rules, a collection of algorithms is utilized to describe words and derive meaning from them. Syntax techniques that are frequently used in NLP include the following:

Semantics refers to the meaning that is conveyed by the input text. This analysis is one of the difficult tasks involved in NLP, as it requires algorithms to understand the meaning and interpretation of words in addition to the overall structure of a sentence. Semantic analysis techniques include:

Natural Language Understanding often uses configurations to inform the machine learning model about what types of actions a program should take. These configurations include information about "intents", and facilitate matching input data to the actions. The YAML manifest in the code listing shows how these manifests look. It is written for the RasaNLU framework, a popular open source framework for building chatbots.

The manifest tells Rasa about three intents: Say hello, get a list of restaurants, say goodbye, and the types of language which should prompt that action. Rasa also provides examples of text that might correspond to variables of interest. For example, when saying hello it is able to parse out names. When asking about restaurants, it attempts to parse out types of cuisine such as Sushi

The example in the listing is taken taken from "NLP for Hackers." The link includes additional examples as well as a tutorial on how to build a complete chatbot on top of the Rasa framework.

Natural Language Processing is an incredibly powerful tool that is critical in supporting machine-to-human interactions. Although the technology is still evolving at a rapid pace, it has made incredible breakthroughs and enabled wide varieties of new human computer interfaces. As machine learning techniques become more sophisticated, the pace of innovation is only expected to accelerate.